Sean Katterle, owner of Hardcore Powerlifting, LLC, told IronMind®, "It's live!" . . . meaning the high-resolution version of his no bench shirt-no squat suit meet at the Ronnie Coleman Classic Expo in Dallas can now be seen at bodybuilding.com. 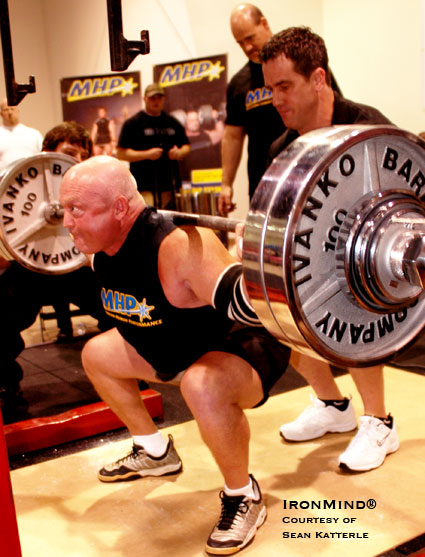 "A few months out from the contest, Jesse Kellum reminded people that he was now 43 years old and that time was running out for the pros who wanted a shot at taking the 'old man' on the super open division platform," Sean Katterle told IronMind®. "Well, there were some strong takers on Jesse's challenge but none were up to the task on this day. At 218 pounds bodyweight Kellum went 750 in the squat (NO knee wraps!), 520 in the raw bench and 680 on the deadlift platform for a highly impressive 1,950-pound total." IronMind® | Photo courtesy of Sean Katterle/Hardcore Powerlifting, LLC.

Produced and promoted by Hardcore Powerlifting, LLC, this contest produced some impressive performances and here's the link to the high-resolution video:

This contest was produced and promoted by Hardcore Powerlifting, LLC, and Katterle is quick to acknowledge his sponsors: "A special thanks to MHP for putting up $10,000 in cash awards and to SLAPPA.com and EOSportsGear.com for adding over $2,000 worth of prizes to the pile of loot that was up for the winning in Dallas."