There’s no moss growing under the feet of Mas Wrestling USA—coming off their midwestern debut at the Arnold, they’re gearing up for a worlds qualifier at the San Jose FitExpo on July 13. 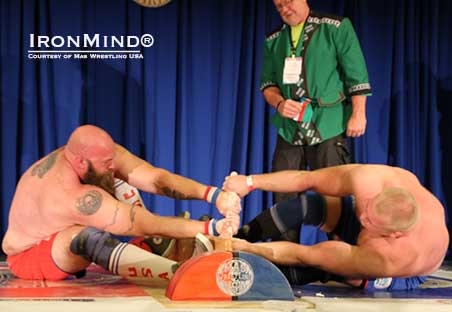 Long a fan of both fighting and strength sports, Haugen said that he’s long been looking for the right combat-type strongman event and mas wrestling fits the bill—directly pitting one competitor against the other and it’s also what he sees as “the single best test of functional strength.”

More than that, Haugen said he sees a television future for mas wrestling because “it’s easy to understand, exciting, dramatic and very explosive.”

Meanwhile, mas wrestlers and their fans, mark your calendars: the 2014 San Jose FitExpo will host a mas wrestling clinic on July 12, with the world championships qualifying tournament on July 13.