After the first day of competition, Misha Koklyaev (Russia) leads the 2010 Strongman Champions League - Finland competition, but Terry Hollands (US) and Travis Ortmayer (USA) are hot on his heels. 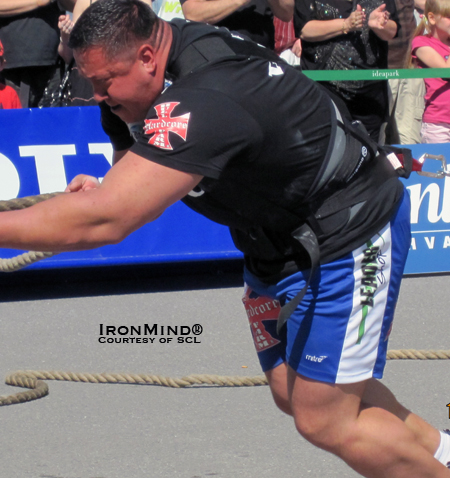 Russia’s Misha Koklyaev’s strong performance on the first day of SCL-Finland put him in the lead.  IronMind® | Courtesy of SCL.

It was over 25º C and sunny when the first event started.  This kind of weather is not usual this time of the year in Finland, but it was perfect for doing the Volvo Bulldozer arm-over-arm event and Volvo Truck Pull Harness and Rope.

The Bulldozer was [as] heavy as we thought.  The distance was 15 meters, but most of the distance the athletes had to pull was uphill, and none of the athletes did full distance.  Coming closest to the finish line was Misha Koklyaev, with a distance 13.45 m, followed by Terry Hollands with 13.15 m; and third best was Agris Kazelniks at 13.10 m.

After the Bulldozer, the athletes had a two-hour break before going to Truck Pull.  The Truck Pull was done in same surface and for same distance as the Bulldozer.  This Volvo truck has the world’s strongest engine and it moved better [than the Bulldozer].  The top three were Terry Hollands (20.59 seconds), Vidas Blekaitis (22.67 seconds), and Travis Ortmayer (23.19 seconds).

The third and the last event of day 1 was the Euromaster Wheel Flip.  This was the only event today which was done inside of the shopping mall.  The athletes did a total of 8 flips for time.  The winner of the Tyre flip was Travis Ortmayer, second Misha Koklayjev and third Johannes Arsjö.

Here are the official overall points after the first day: