“It has happened only once before in SCL history that two athletes have been in in same points and same places in events,” Ilkka Kinnunen told IronMind today as Misha Koklyaev and Zydrunas Savickas tied at SCl-Poland last weekend. 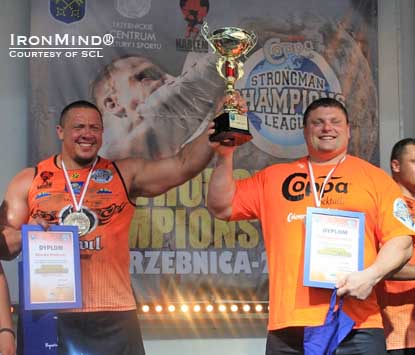 
“In 2010, SCL–Ireland Terry Hollands and Zydrunas Savickas shared the top position and now in Poland Misha and Zydrunas [did it, too].   Again, unbelievable battles all the way to the end.

“The Log Medley was the fourth event with a 160 kg log, 95 kg Dumbbell two times and a 180-kg log. This was something that everyone was waiting for: huge weights in medley with top pressers. The winner was Koklyaev doing all four lifts in a time of 26.99 sec.  Savickas was second with a time of 27.03 sec, and third was Radzikowski in 30.47 sec. These were only ones who did all the lifts.

“What a competition: a lot of great fights and close times.  Big thanks for the city of Trzebnica and the Polish organisation for an excellent job done,” said Kinnunen.

Here are the official final scores for the top six. 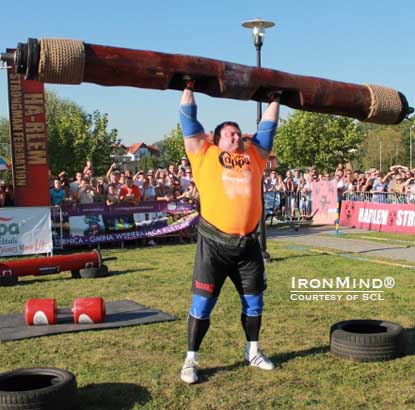 Zydrunas Savickas handles the 180-kg log in a shoulder power medley at SCL-Poland.  As mighty as Big Z is on pressing events, Misha Koklyaev won this medley.  IronMind® | Photo courtesy of SCL.