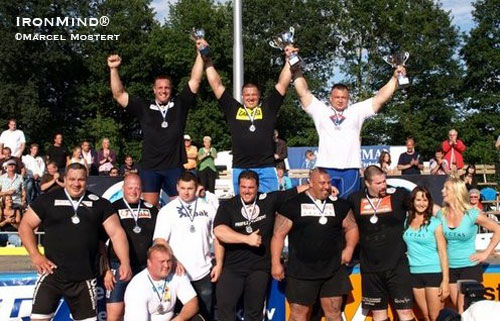 Strongman Champions League: Misha Koklyaev Rules . . . Jarno Hams New Dutch Record in the Log, But Is Out of Fortissimus!
by Marcel Mostert

We had a bad start of the day as the weather started with heavy showers.  Still, the show must go on and after a delay of one hour, we did log lifting in the rain.  Raw power against the rough nature with her weather elements.

Surprisingly, Jarno Hams won the log lift in a new Dutch record of 177.5 kg, so his start looked promising in his home country.  Misha Koklyaev and Agris Kazelniks just followed, 2.5 kg behind. Jani Kohlemainen from Finland hurt his biceps and had to step out of the competition.  Meantime, the weather got better and the sun started to shine again.

But the second event, the medley, made Jarno's perfect start a bad day in his career.  Just coming over the finish line with the 380-kg yoke from the medley, something tore in his left leg, and he had to leave the field by ambulance.  It was a very sad moment for the athletes and fans, as the crowd just survived the rain.  Jarno immediately realized that he will be out for Fortissimus this year, a big pity as he just showed his perfect shape with a new Dutch log lift record.

But the battle continued.

Misha Koklyaev did what he came for, to take the title and he won the SCL Holland. The battle for second place was between Agris Kazelniks and Richard van der Linden, a relatively new Dutch athlete in strongman and second in the Holland National Championships last year, Matt Wanat from the USA and Jimmy Laureys from Belgium

Agris took second place overall because he was just more experienced in strongman than Matt and Richard.  Richard was third overall and was very happy with this result.  At least Holland’s honour kept high in this scenario of the day.  Matt and Jimmy made a real tight finish for fourth and fifth place, separated by just a half point.

Levi Veoga, the great strongman and showman from New Zealand, did very well and impressed everyone with his 200-kg bodyweight and his warrior dance.  The crowd loved it.