Taking the event to new heights, literally, Mike Zolkiewicz punched out an 18’ 9” throw in the 56-lb. weight for height today, in the first day of competition at the International Highland Games Federation (IHGF) World Highland Games Team Championships in Antigonish, Nova Scotia (Canada). 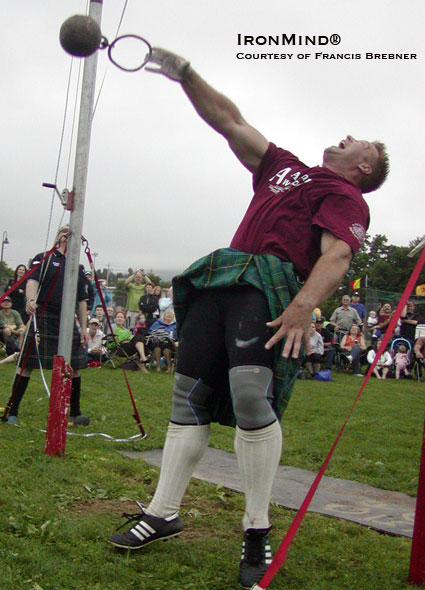 Mike Zolkiewicz hit a huge 18’ 9” in the 56-lb. weight for height, for a new world record.  IronMind® | Photo courtesy of Francis Brebner.


Calling the action from the field, Francis Brebner filed this special report for IronMind®:

The final event of the first day’s competition, the 56-lb. weight over the bar, proved riveting for the six thousand spectators, who watched Zolkiewicz win the event at a very impressive height 17’.  In second place was Betz at 16’; Docherty also cleared 16’ but placed third on countback.

With the crowd encouraging him, Mike’s first three attempts just narrowly missed clearing the bar.  With three more record attempts, Zolkiewicz nailed the second one, establishing the new world record height of 18’ 9” to the wild cheers of the six thousand spectators.

The team scores after day one are as follows:

Tomorrow’s competition will include the scores of the final three events:  the 16-lb. open stone, 28-lb. weight for distance, and 16-lb. hammer.