Mike Pockoski won the Stonehaven Highland Games on Sunday with barely enough time to catch his breath between landing in Scotland and hitting the field. 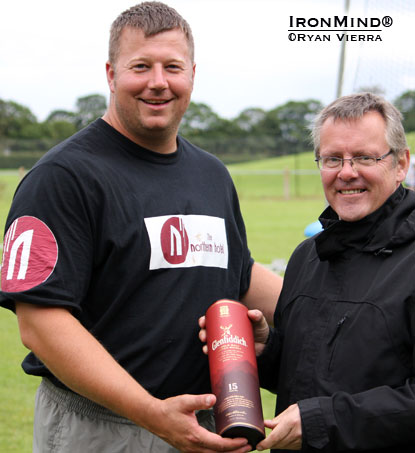 
After having arrived from the States on Friday and participating in a rugged competition on Saturday at the Balloch Highland Games against some of Europe’s best professional athletes, Pockoski looked more refreshed at this Sunday event.

IHGF representative for France Jean-Louis Coppet, from Bressuire, brought the team of French athletes, including Amroun, to compete for the first time in Scotland at the Lochcarron Games on Saturday, followed by Stonehaven Games on Sunday.

The 22-lb. shot was won by Price at a distance of 45’ 4”; second place was Pockoski and third place Robb.

The 16-lb. hammer was won by Pockoski with a throw of 131’ 9”; second place was Grammer and third place Price.

In the 22-lb. hammer, Pockoski dominated with a throw of 108’ 11”; second place was Sinclair and third place Aitken.

The 28-lb. weight-for-distance was an exciting event as Scotland’s Sinclair let rip with a huge throw of 87’ 8” for the win, with Patience in second place and Pockoski in third.

In the 56-lb. weight-for-distance, the tables were turned with Price taking the win with a distance of 37’ 11”, followed by Robb in second and Vierra in third.

The 56-lb. weight-over-bar was won by Grammer at a height of 16’.  The second-place tie was between Price and Pockoski.  Pockoski was the overall winner of the Games.