Mike Pockoski got the win and Eric Frasure continued on his hot streak - Francis Brebner has filed this report on the Richmond Highland Games. 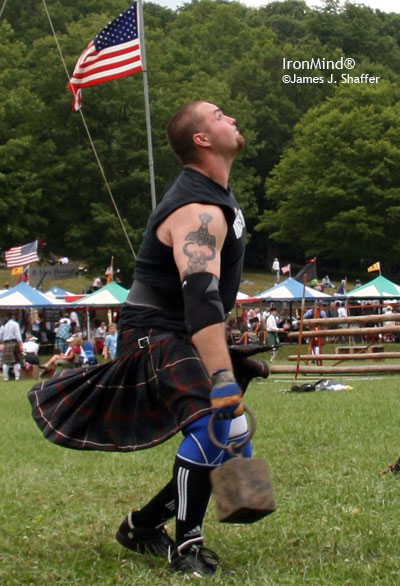 Eric Frasure spun his way to a dizzying 19' 6" in the weight over the bar. IronMind® | James J. Shaffer photo.

It was a three-way battle of throwing this weekend between Eric Frasure, Kerry Overfelt, and Mike Pockoski at the Richmond Highland Games. Despite the rain, twenty-five thousand spectators were steadfast as they cheered on their favorite athletes throughout the competition.

In the opening round of the 16-lb. open stone, Dave Barron ripped a massive putt of 55' 3" for first place, leaving Baron well pleased with a personal best; in second was Chris Chafin at 51' 9" and in third, Eric Frasure at 51'.

In the 56-lb. weight for distance, Frasure, showing great form this season in this event, came through with a winning distance of 45' 9"; second was Kerry Overfelt with an impressive throw of 43' 7-1/2". Chris Chafin, who is making his name known to us in the throwing world, placed third with a nice toss of 41' 10".

But in the 28-lb. weight for distance, Kerry Overfelt pulled up a gear on Frasure, just narrowly pipping him with his final throw of 87' 8" for the win, with Frasure in second by just a shave at 87' 5", and Mike Pockoski in third at 82' 6".

Looking at the caber event, this was by no means an easy caber at 20' and 130 lb., with Pockoski being the only athlete to turn the big stick, with a 10:30 toss; in second was Overfelt at 88 degrees, and in third, Dave Barron at 85 degrees.

The 56-lb. weight over the bar was very exciting, with Frasure much surprised to say the least by his clearing a height of 19' 6", which is the third best height ever to be recorded in the spin. Second was Overfelt with 17', and third was Chris Chafin on countback also with 17'.

Frasure said, "I was really surprised to clear that height. I have been training smarter in the weight room and would have to give credit to my strength coaches Mike Yartin and Mike Golden, who have been putting me through the ropes, so to speak. Already we are focusing on next year's season and will begin our game plan as soon as the season ends. I feel very confident with the coaches I have behind me that my throwing will be considerably on the rise, with a eye to being the first athlete to go over 50' in the 56-lb. weight for distance and possibly 100' in the 28-lb. weight for distance."