It came down to the last event at the ASC Olympia Strongest Man contest, and it was Mike Burke who pulled off the big victory. 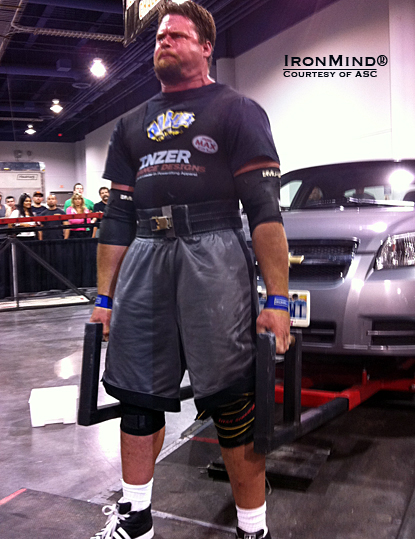 Mike Burke on the Car Deadlift for reps at the Olympia Strongest Man contest.  IronMind® | Courtesy of ASC.

Day two started with the progressive yoke. The weight started at 850 pounds for 50 feet, and the top ten guys with the best time moved on to 950 pounds for 50 feet. Mike Burke was not one of them, but Tom McClure and Marshall White were. The top six guys for 950 pounds then moved on to the 1050 pounds.   Again Tom was there to take the advantage.  Mike Caruso of Michigan (competing in his first ASC show since earning his pro card in August 2010) sprinted down the course in a little over 15 seconds to take the win in the event.

The second event of the day was the Overhead Press Medley.  Caruso again wins the event and is getting closer to closing the gap to second place.    The third event was the Car Deadlift for reps, and since the car seemed light during testing, ASC decided to turn the car around so the athletes would deadlift the front of the car.  For many athletes, completing more than 2 or 3 repetitions was a task, but for Carl Foemmel, 12 repetitions was no problem!

The final event of the day was the IronMind Suicide Medley: The athletes had to carry a 220-pound IronMind sandbag for 50 feet and load it into a sled, then load a 275-pound keg, followed by a 250-pound block.  After all implements were loaded, they then had to drag the loaded sled for 50 feet.

Many thanks to our head judge and field coordinator Patrick Rogers, as well as all of the staff members that came to Vegas and volunteered their time during the contest.  Full results will be posted on the American  Strongman Corporation (ASC) website.