Chatting with Mike Burke on Saturday at the LA FitExpo, grippers came up, and he mentioned that he’d never tried a Captains of Crush No. 3.5, so I told Mike that I had one with me, if he wanted to try it, maybe, after the contest, and Mike said he would. 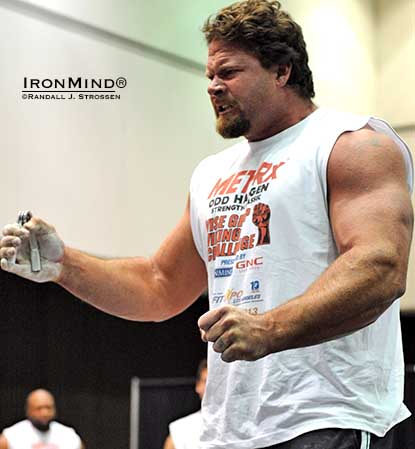 Among his performances in the grip contest at the LA FitExpo, Mike Burke broke the CoC Silver Bullet Hold world record—keeping a CoC No. 3 gripper clamped on the Silver Bullet for a world record 53.97 seconds before his hand opened up.  Imagine doing that and then succeeding on his official attempt to close the Captains of Crush No. 3.5 gripper?  That’s exactly what Mike Burke did and now he's the latest guy to certify on the CoC No. 3.5.  IronMind® | Randall J. Strossen photo.


After what Mike went through—ripping the place apart with his world records on the IronMind Apollon’s Axle Deadlift, the CoC Silver Bullet Hold and then Inch DB Deadlift for Reps—you’d have thought his hands would be toast and I surely was not going to force a CoC No. 3.5 on him, but when Mike asked me about the CoC 3.5 right after he’d sent the grip world into orbit with his performance, I ran over to Clay Edgin (CoC3 ’03 , Red Nail ’04), told him what was up and asked if he’d like to referee the attempt.  Clay, who’d been masterfully emceeing all weekend, said yes, and about two minutes later, Mike Burke had decisively put away the CoC No. 3.5 on his official attempt.

Mike Burke, 38, stands about 6’ 6” and weighs about 335 and he’s only been lifting weights for about three years, having played football and been a snowboarder before he jumped into strongman.  Although Mike’s been competing in strongman for only a few years, he competed in the qualifying round of the 2012 World’s Strongest Man contest and then went straight over to the America’s Strongest Man contest, where he won the title.
To say that Mike Burke is the biggest thing in the grip world at this moment is quite an understatement—after watching him destroy world records and level the field at the Visegrip Viking grip contest, why not expect him to end the day by destroying the CoC No. 3.5 as well?!

Many thanks to Clay Edgin for ably serving as the referee on Mike Burke’s official attempt, and congratulations, Mike, it’s official and your name has been added top the official Captains of Crush No. 3.5 gripper certification list.