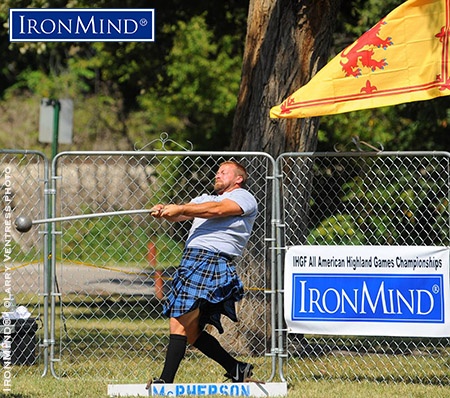 Kevin Becker was second on both hammers, as well as being the overall winner of the HSAS/IHGF All American Championships, so this means he’s qualified to go to Fefor, Norway for the 2016 IHGF World Amateur Highland Games Championships. IronMind® | Larry Ventress photo

The ever-popular McPherson, Kansas Highland Games hosted the HSAS/IHGF All American Highland Games Championships and Francis Brebner, who was on the field, called the action for IronMind.


One of the highlights this past weekend at the 2015 McPherson Highland Games in McPherson, Kansas was undoubtingly the HSAS/IHGF All American Highland Games Championships, with a total of 10 athletes taking part in eight events over two days of heated competition. On Saturday, 28 athletes took to the field for the men’s amateur A B & C groups, the women’s masters, and the women’s amateur class. Competing in the HSAS/IHGF All American Highland Games Championships were: Bryan Staggs, Ryan Huddleston, Eddie Johnson, Keith Painter, Andrew Heaton, Gary Randolf, Skyler Arneston, Matt Hand, Scott Hutchinson, and Kevin Becker.

Becker, of Texas, comes from a track and field background, and he gave a top-notch all-round performance at only 235-lb. in bodyweight. He has a great future in the sport of Highland Games, no doubt. But Becker had to work as he was pushed by Hutchinson, who was hungry for the title and a chance to represent his country in a second World Amateur Highland Games Championships. After the dust had settled, though, Becker had secured top honors and will go forward in the 2016 IHGF World Amateur Highland Games Championships in Fefor, Norway.

The 56-lb. weight over bar was big event for Becker, who made a big impression on 5-time world champion Ryan Vierra, as well as myself, when he topped 17’ and then attempted 18’ 1”. Arneston was second at 16’, with Hutchinson and Hand both at 14’.

The caber, measuring 16’ long and weighing 114-lb., proved a real challenge and was scored on degrees, the win finally going to Becker with 75 degrees, followed by Hutchinson at 65 and Heaton at 55.