Fergus hosted this year’s World Heavy Events Championships and with a battle that came down to the final event, it was second-year professional Matt Vincent who took the crown. 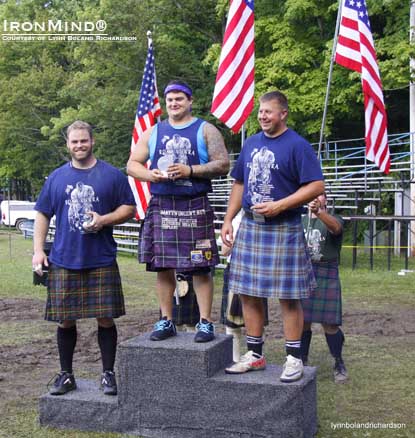 The Fergus Highland Games, which is one of Canada’s premier Games and host of this year’s World Heavy Events Championships, celebrated thirty two years since first being established by David Webster, OBE.

A total of twelve of the world’s top ranked heavy events athletes were invited to battle it out in a total of eight of the traditional throwing events where only one would be crowned World Champion and add his name to the pages of history and the long list of past champions.

Opening event with the 24-lb. Braemar Stone was a thrilling event from the first round, with the Poles Lucas and Sebastian Wenta dominating: Sebastian won with a fantastic series of World Class putts, all of which were all over 40’ with his best being 42’ 4½ ”.  In second place was Lucas Wenta with 40” 4½” , and in third place was USA’s Matt Vincent with 38’ 9” .

The hammer events both followed with the 22-lb. hammer being the second event of the competition.  Dan McKim currently ranked number one with the hammers, with the biggest throws of the 2012 season, was tipped to win this event, but the three times World Hammer Champion Mike Pockoski came alive and pulled out the winning throw of 114’ 8” securing his first win of the World Championships.  In second place was Dan McKim with 111’ 5” and in third place was Scotland’s Craig Sinclair with 109’ 10”.

In the 16lb hammer it was a tight tussle once again between Pockoski and McKim with Pockwski snatching his second straight victory over McKim with a throw of 142’ 4’; in second place was McKim with 142’ 2”, and in third place it was Matt Vincent with 137’.

The 56-lb. Weight for Distance was an amazing event to watch as big numbers were being pulled out left, right and center with the surprise win going to Mike Pockoski in his last attempt with a throw of 45’ 1”; in second place was Matt Vincent with 44 ’6½”  and in third place McKim with 42’ 4½”.

Now at the half way stage, Mike Pockoski took hold of the reins with a three-point lead over both Dan McKim and Matt Vincent, who were now tied in points for second place overall.

After a break in the action, competition resumed with the 17-lb. Open Stone.  This event was won by Matt Vincent who on his last attempt pulled out the winning putt of 57’ 2”; in second place was Sebastian Wenta with 54 ’5” and in third place Lucas Wenta with 54’ 1½”.

With only one more event left in the competition, the points could not have been tighter with Mike Pockoski leading with 71 points, with both Sebastian Wenta and Matt Vincent tying with 69 points, and Dan McKim in third place with 66 points.

It all now came down to our final event with the 56-lb. Weight Over the Bar to decide the 2012 World Heavy Events Champion: it was any of the top four athletes’ for the taking; it was just a case of who wanted it the most and could keep himself together and make no mistakes.  The event was finally won by Lucas Wenta, clearing a height of 17’.  In second place was Matt Vincent with 16’ 6” and in third place Dan McKim at 16’.

Asking Matt Vincent about his overall win and performance and being the newly crowned 2012 World Heavy Events World Champion, Vincent replied, “I stayed strong throughout all the events and I just am so happy it all came together on the day and am on cloud nine at the moment."

This was undoubtedly the most competitive world championships I have ever witnessed which had the possibility of any four leading athletes winning the championships going into the last event which was a really climatic finish.

Special mention has to be given to Head Athletic Director and head Judge Warren Trask and his field crew who did an outstanding work in making these championships definitely one for all involved to remember.