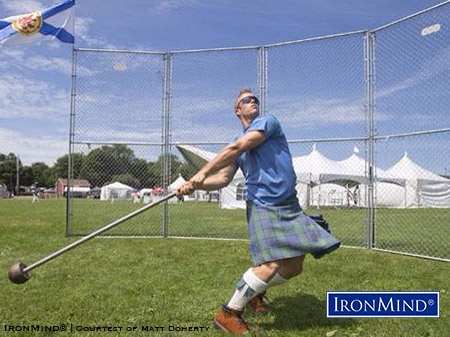 The Antigonish Highland Games in Nova Scotia, Canada, the oldest games in North America, celebrated its 152nd consecutive championships. These games have a remarkable atmosphere of friendship and hospitality, for which they are renowned. The week-long program included a packed roster of events, from Scottish fiddles and pipe bands, to heavy events, Highland dancing, and clan gatherings from Canada and around the world.

This year’s Maritime Scottish Heavy Events had one of the biggest entries of athletes, a total of fifteen, including a top Canadian Matt Doherty of Antigonish, who just a month earlier placed third at the IHGF World Highland Games Championships in Bressuire, France. Doherty was in top form, competing at a mere 230 lb. bodyweight and considered by many to be, pound for pound, the best heavy events athlete in the world.

In a riveting contest with the 56-lb. weight over bar, Thiesson won at a height of 15 ’6”; second was a tie between Doherty and Danny Frame at 15’.

In the 28-lb. weight for distance, Doherty was poetry in motion in his warm-ups and looked as if he was going to pull out some big throws—which he did in a blistering series all over 80’ with his best at 81’ 10”, a foot less than the field record. Thiesson was second with 72’ 9”, and Hadley third at 71’ 7”.