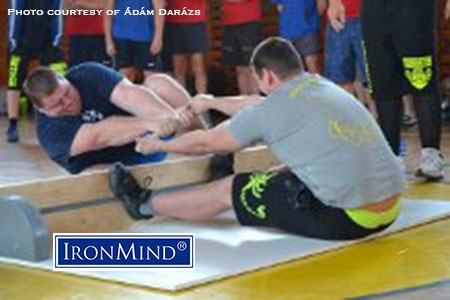 Mas wrestling—a sport with ancient, global roots that has been callled “close quarters tug of war—debuted in Slovaki and IHGF CEO Francis Brebner reported on the action for IronMind.


Last weekend the first ever mas wrestling competition was held in Slovakia, in the town of Dunajská Streda. The event was co-produced by organizers Ádám Darázs of Hungary and the newly formed Slovak Mas Wrestling Association. 46 athletes representing Slovakia, Hungary, and the Czech Republic competed, in four weight classes: 85 kg, 110kg, 125kg, and +125kg.

“It was a fantastic competition from start to finish,” said Darázs, “which created an incredible atmosphere.”   Athletes came from many backgrounds, including strongman, powerlifting and Highland Games, and gave their all, enthralling the audience from start to finish. Darázs went on to say that he thinks this is a good start for the sport of mas wrestling, which has now received an invitation from the town to hold a mas wrestling Summer Cup Championships.

Top three in each class: