Martin Wildauer won Austrian Giants for the seventh time and appears to be headed for a very strong performance at the World’s Strongest Man contest in August, Heinz Ollesch reported to IronMind. 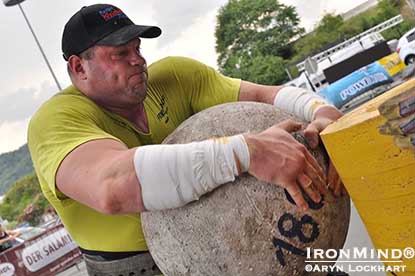 Martin Wildauer won the Austrian Giants last weekend the 7th time. (Summer and Winter Giants together). He was in great shape and dominated the whole contest.

In very hot weather on the two contest days, conditioning was a big factor. Martin, even though he was one of the heaviest athletes, had no problems at all. This shows his great improvement he made this year since his patella makes no problems anymore and he can train at full speed. I am sure the guys who will be in his group for WSM [World’s Strongest Man] this year have to be more than in top shape to stop Martin from making it to the Finals. He did show already in the Champions League that he will be a tough guy to beat and with only 25 years of age he is already in the Top rankings of strongman.