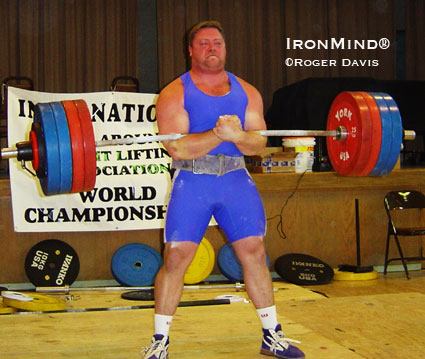 “Mark Haydock completing the big Zercher needed to win the overall competition and bring home the bacon,” said Roger Davis.  Mark is around 125 kg, and the lift was, I believe, 235 kg.  Mark did make an attempt at 250 kg also, but it was not to be.”  IronMind® | Roger Davis photo.


“Although a relatively low turnout this year, the lack of lifters was more than compensated by the quality of lifting and the fine comradeship and camaraderie shown by all,” said Davis.

“I hope to give MILO® readers a blow-by-blow account of the meet and explanation of the lifts in a future issue,” said Davis, who isn’t just an idle reporter, as he explained:  “I travelled out from the UK on Friday, lifted Saturday, Sunday and travelled back early Monday morning . . . I feel like a MILO® roving reporter, and know how you feel!”

Davis came in an impressive fourth place overall: “[I was] . . .  pretty pleased with my lifts, and more pleased that I got home in one piece . . . those 7 lifts were pretty tough.”