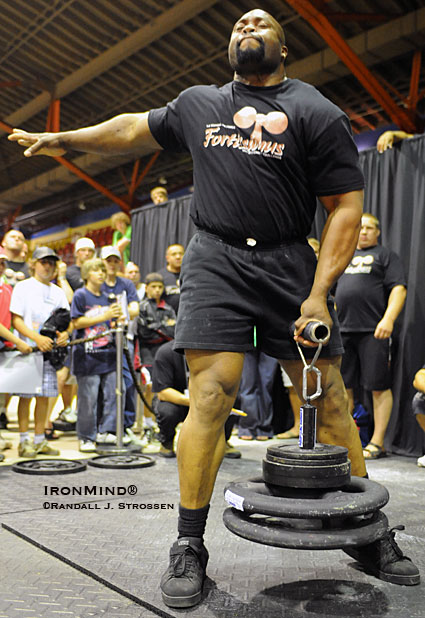 But give Andrus Murumets his due, because tonight Mark Felix and he were the class of a very tough field - a field that had been whittled down to just four competitors by the time the weight hit 115.5 kg.

Mark Felix and Andrus Murumets made the 115.5 kg easily, but Phil Pfister didn’t quite have the steam to make this weight and Odd Haugen completed the lift, but he hadn’t waited for Magnus Ver Magnusson’s down signal, so it was no lift.

After Mark Felix and Andrus Murumets made 115.5 kg look light, they jumped to 123 kg, and once again, Mark Felix made it look simple.  When Andrus Murumets couldn’t complete the lift, Mark Felix - 2009 Rolling Thunder World Championship in hand - attacked his world record, taking 302 pounds, but it was a little too heavy even for him tonight.

Paul Ohl called the action - in French and in English - for a crowd of about 500 spectators, and lest anyone question the name of this event, the thunderstorm that broke out part way through the contest provided a level of theater beyond anything that might have been scripted.