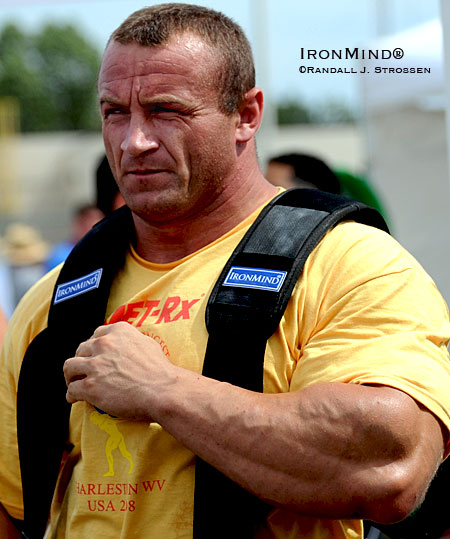 His mere presence is a game changer in strongman - he draws in fans like a magnet and makes most competitors assume they are competing for second place at best. When Mariusz Pudzianowski won the 2008 MET-Rx World's Strongest Man contest, he made strongman history, again. IronMind® | Randall J. Strossen photo.

The injury, Mariusz told IronMind®, was from a strongman contest in Poland, which he said, "I just try to cure. Now, since WSM, I have free time . . . only for rest and relax[ation]. I didn't make the operation and I think I will try to take more care of my calf and my knee. I need more rest and good medical care.

"I think that one or two months free without any strong effort or load is good for my injury rehabilitation," Mariusz continued, saying that he would resume training tomorrow (January 1, 2009), but he noted, "I will start my training very slowly."

And this training of which Mariusz Pudzianowski speaks is motivated by a clear image of who he is and what he does: "I will be back to strongman game. You know that my job is to be a strongman. I like it and I will try to do what is the best. I will hope for next WSM title in 2009."

Setting the stage for more big things to follow, Mariusz Pudzianowski added, "To all readers of IronMind's News, I wish in 2009 New Year more strength every day and more trust in strongman."