Mariusz Pudzianowski has just told IronMind that he is not competing in this year's Arnold strongman contest. 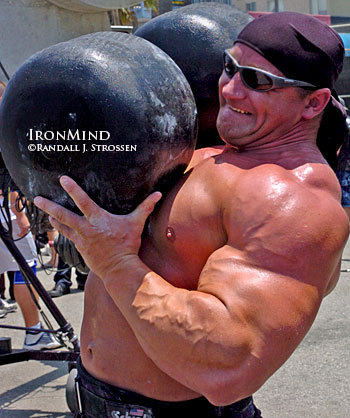 Mariusz Pudzianowski is picking his shots, and he won't be competing in the 2009 Arnold strongman contest. IronMind® | Randall J. Strossen photo.

The five-time World's Strongest Man winner had been penciled in on the start list at this year's Arnold strongman contest, but there seemed to be good reasons to question whether he was actually planning to compete.

For example, Mariusz followed his 2008 World's Strongest Man victory with a well-deserved rest and only resumed training at the beginning of the year. Considering this, his recent injuries, and his statements about competing in both FORTISSIMUS and the World's Strongest Man later this year, it seemed likely that the Arnold might not fit into his 2009 competition calendar.

What is at the top of the strongman superstar's priorities is the 2009 World's Strongest Man contest, but once again the subject of surgery came up, and that is something that could alter the plans of even the mighty Mariusz: "If my knee is okay" might be the five biggest words on this year's professional strongman circuit.