It's never been done, but then there's never been a strongman like Mariusz Pudzianowski before, so why shouldn't he set his sights on winning the MET-Rx World's Strongest Man contest for a fifth time? 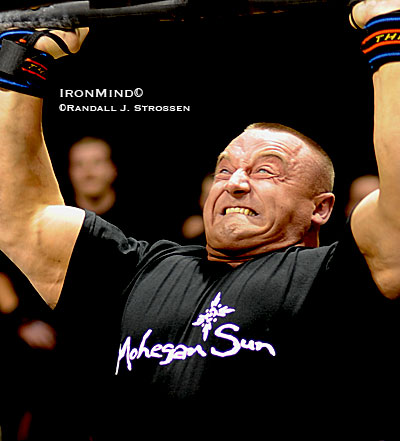 "He's a warrior," says Mariusz Pudzianowski's co-manager Wojtek Witkowski, and if his will has its way, Mariusz will be winning his fifth MET-Rx World's Strongest Man contest this year. IronMind® | Randall J. Strossen, Ph.D. photo.

Addressing the on-again, off-again rumors about Mariusz Pudzianowski's knee surgery, his co-manager Wojtek Witkowski told IronMind® that Mariusz has not had the surgery and that Mariusz decided against it because he was concerned about the possibility of a negative outcome that could keep him from competing in this year's World's Strongest Man contest.

"Mariusz is a warrior," said Wojtek, so just because Mariusz says that his knee feels okay, for example, things might not be quite that simple. "If it is hurting, he might not tell the truth . . . He is a fighter . . . Only he knows."

Still, Wojtek did say that the current plan is for Mariusz to undergo surgery on his knee after this year's World's Strongest Man contest.

Confirming that Mariusz is weighing about 150 kg, Wojtek said that the four-time MET-Rx World's Strongest Man winner is fit and fast, as well as strong, so if you add that to his redline drive, the idea of a WSM quintuple seems perfectly well within Mariusz Pudzianowski's reach.