Never underestimate Manfred Hoeberl:  For starters, he might have looked like a bodybuilder when he was actually very strong and proved himself as a top strongman. 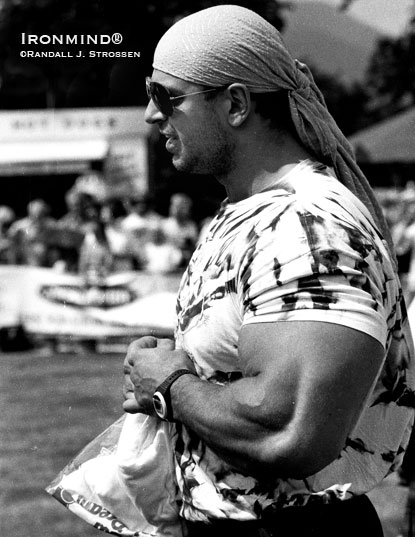 Until you saw him in action, it would be easy to dismiss Manfred Hoeberl as a mere bodybuilder, especially given his prodigiously developed arms, but, in fact, he was a top strongman - displaying power and athleticism, not to mention being a savvy competitor.  Here, Manfred Hoeberl is shown in Scotland in 1994, where he won the European Musclepower Championships one weekend and then the World Musclepower Championships the next weekend.  IronMind® | Randall J. Strossen photo.

And for anyone who still dismissed him as being just might and muscle, consider that Manfred Hoerberl was educated as an engineer, and it’s that background he has been tapping as he works in the field of renewable energy, helping to quench the world’s thirst for solar power, in particular.

Trading the strongman circuit for solar energy projects?  Talk about a change.

Strongman, Hoeberl told IronMind®, was something he did for fun, in his youth, and he thinks that if one treats it as more than a hobby, disappointment is likely.

While he says, “I think nothing is impossible,” that’s as far as Hoeberl goes in terms of believing a strongman or a power athlete can catapult himself to fame and fortune based on his athletic performances.

“It’s too late for the super machos,” Hoerberl said as he weighed movie options.  “They are into the softies now.  Mega-muscle guys were already on their way out [years ago] . . . there was not the demand for it.”

So, if Manfred Hoerberl ever went country western, we might hear him sing, “Mamas don’t let your babies grow up to be strongmen.”