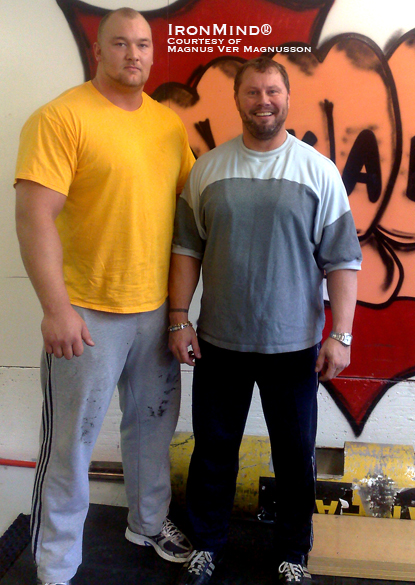 Magnus Ver Magnusson is president of the Federation of Icelandic Strongmen and he told IronMind®, “I have four contests coming up.”

Let’s start with the Strongest Man in Iceland, which is June 5 in Grindavik, during an Icelandic national holiday called Fisherman’s Day. With a bronze statue of Jon Pall Sigmarsson and major bragging rights going to the winner, it’s a truck pull and then deadlift for reps followed by Atlas stone for reps, circus dumbbell and farmer’s walk/super yoke medley.

Hafthor Julius Bjornsson used to play basketball, Magnus Ver said, and the two met shortly before Magnus Ver Magnusson opened his gym, Jakabol.  A knee injury ended Bjornsson’s basketball career, Magnusson said, but he seemed like a good prospect for strongman.  In fact, Bjornsson broke two Icelandic records in the stone carry last year, Magnusson said, and, along with gaining about 35 kg of bodyweight since their initial meeting, Bjornsson is now deadlifting 350 kg.

“In two years, he will be really good,” Magnusson said of his latest find.