Swedish strongman star Magnus Samuelsson has been dubbed "King of the Stones," and he's won the coveted World's Strongest Man contest, but if that's not enough, many experts also say that he has the world's strongest arms and hands. 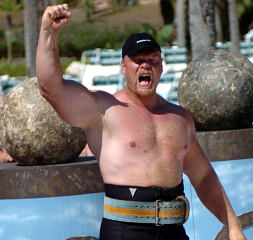 Chances are good that when you see the new Magnus Samuelsson DVD - which focuses on how to build huge, strong arms and a mighty grip - you just might feel that he deserves that title along with all the others he has earned. And at worst, you will be shaking your head in amazement, listening carefully, eager to absorb his comments about training so that you can tap into his advice for your own progress.

We're not going to spill the beans, but you don't have to worry about this DVD featuring shadowy performances on suspect equipment: For example, Magnus marches right up to a brand new No. 4 Captains of Crush® Gripper, which is opened on camera, and then he . . . Well, we wouldn't want to ruin the surprise for you.

Closing grippers is great and even a merely "very good" attempt on IronMind's No. 4 Captains of Crush® Gripper is an outstanding accomplishment in the world of hand strength, but to really set yourself apart, your excellence has to include even more, and what more could you ask than to see Magnus Samuelsson attack piles of plates, lifting them with a Rolling Thunder®. And when he finally calls it quits and puts the whole works on a scale, let's just say that the number is big.

No hot air here: This is the domain where world class means just that, and it's also the case that near misses, unverifiable successes, and lifts performed under unofficial conditions all get reported as just that.

And as an added note of interest for you "what's-his-arm-really-measure" guys, here's what we'll say: World's Strongest Man Svend Karlsen measures Magnus's pumped up arm in centimeters, on camera, and then producer Colin Bryce measures it in inches. Give us your best guess, and we'll give the person who comes closest to the actual measurement (or the first person to hit it dead on) a free copy of this new Magnus Samuelsson DVD - one for the closest guess to Svend's measurement and one for the closest guess to Colin's measurement. One entry per person, please, and you can only guess in centimeters (Svend) or inches (Colin) - not both. Email your best guess to sales@ironmind.com along with your name, street address, email address and phone number. Entries must be received by midnight, Pacific time, January 23rd, and the winners will be announced as soon as the new DVD is released, which is expected to be in early March.

Over a year in its planning and development, this DVD is all about building arms with mass and power beyond most legs, and a grip that defines the very edge of human performance.