Competing with the home court advantage, World's Strongest Man winner Magnus Samuelsson will be a huge draw in the star-studded field at the Swedish Super Series strongman event in Gothenberg on December 5. 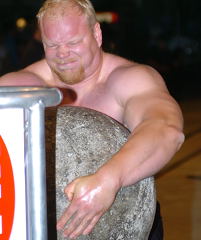 Adding to the drama, Norwegian strongman fans will have a rare opportunity to see their man, World's Strongest Man winner Svend Karlsen, close to home, as he goes head to head with Magnus and other top competitors on the international strongman circuit.

The Swedish Grand Prix will be held in the Swedish Exhibition Center, and it is a qualifier for the strongman contest at next year's Arnold Expo.