Magnus Samuelsson—likely the most commercially-successful World’s Strongest Man winner—told IronMind today that it’s vital to play the cards you have the best you can. 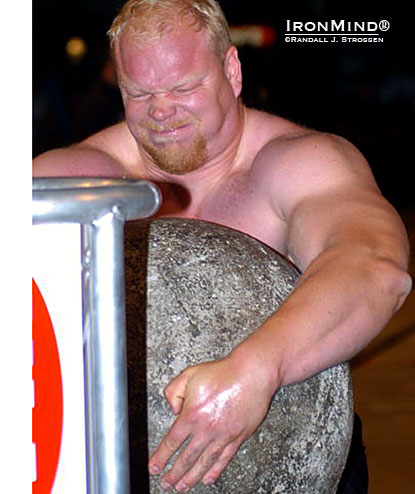 World’s Strongest Man winner, owner of The World’s Strongest Arms, certified on the Captains of Crush No. 4 gripper, former world record holder in the Rolling Thunder, called “The King of the Stones” . . . and that’s only a partial list of Magnus Samuelsson’s accomplishments in the strength world.  IronMind® | Randall J. Strossen photo.


Samuelsson says “luck is a big factor in this journey,” but he is being characteristically philosophical and modest: Samuelsson explained that he viewed strongman as both sport unto itself and as a platform for exposure.

As an indication of Samuelsson’s focus, since he retired from strongman competition, his exposure has kept increasing and his portfolio of successes is bulging like his biceps: product endorsements, a Dancing With the Stars victory, TV shows, rally cars, and more.

Not all has been rosy, though, as about a year and half ago, Samuelsson tore his left rotator cuff, and after a series of three surgeries,he now accepts that it will never be what is was.

“So, is this a good time for me to arm wrestle you left handed,” I asked.

“I’m still pretty good at arm wrestling,” he said, but he keeps his bench presses down to 200 kg to avoid discomfort.

Asked whether he had been doing any grip training recently, Samuelsson said he can still handle about his best on the Rolling Thunder and he uses thick-handled dumbbell rows as a way to gauge his overall grip strength.

“Can you still close a Captains of Crush No. 4 gripper?”

“I haven’t tried lately, but now maybe I will have to again.”

“I would almost be surprised if it were not.”

Trimmed down to about 140 kg, Magnus Samuelsson said he could quickly bulk up again if necessary, but that this is a good body weight for him, adding, “I feel like a skinny guy.