Magnus Samuelsson told IronMind® today that he has done 27 exhibitions in the last 21 days, which should give you an idea of the popularity and marketability enjoyed by this World's Strongest Man winner. 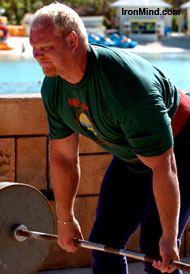 Magnus said that despite this grueling schedule, he had been managing to stay in pretty good shape and one of the things he was doing was deadlifts out in parking lots since he said that he carries a bar and 300 kg of plates with him in the back of his truck. Unfortunately, the guy known to many as "The Giant Swede," tweaked something in his back on a recent set, but he said that expects to return to 100% form and beyond in the near future.