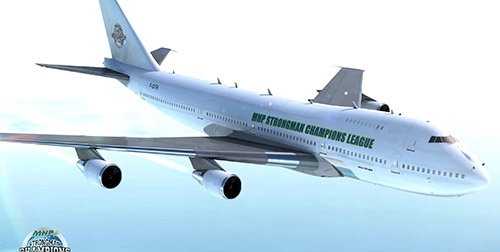 MHP SCL has announced its 16-stage 2016 schedule, spanning the globe and backed up with broadcasts in 95 countries. IronMind® | Courtesy of SCL

“We are proud to present again another 16 stages from the MHP Strongman Champions League this year,” SCL Director Marcel Mostert told IronMind today.

“Broadcasting on a worldwide platform of 95 countries and with a 100 strongmen competing we can be truly called the World’s Strongest League.

“A new scoring system will be introduced this year: the new world champion will be crowned solely based on stage 16, so everybody will have to fight to the bitter end.

“Besides of the fame and worldwide publicity the MHP Strongman Champions League has, we can be seen also as the absolute start-up and educational center for new champions, talents and professionalism,” continued Mostert.

“Athletes such as Krzysztof Radzikowski, Hafthor Bjornsson, Matjaz Belsak , J-F Caron and Martin Wildauer for example—they all got their first biggest international wins in the MHP Strongman Champions League.

“Besides of our league, we are also organizing and co-organizing a lot of small national competitions, team competitions and specials such as the World Log Lift Championships on 20 May in Lithuania, together with Mr.Strength himself, Zydrunas Savickas, who told me that he wants to set a new world record there, which should be enough for the coming 10 years!

“That is pure excitement and we can’t wait until the 20th of May.

“But first we going to do the 2nd stage of the MHP Strongman Champions League.

“Also, have a look at our latest trailer, just released, with the highlights of the 2015 season, and and stay tuned for more news about each competition on our media platform, our website and IronMind in particular,” said Mostert.