“I am afraid that Alex Klushev from Russia is out [of World’s Strongest Man],” a source close to the athletes told IronMind®. 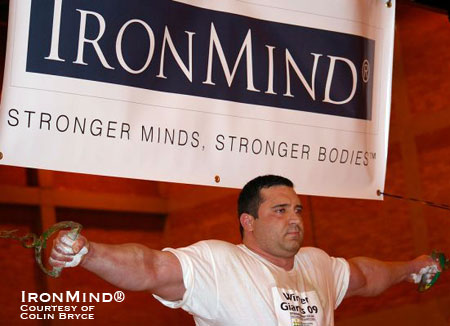 
“He blew his knee out last week.  Ekaterina [Majorskaya] confirmed it a couple of days ago.

“The replacement will be Alex Curletto, ‘Italy's Strongest Man.’  Although he has never officially won the title due to its lack of existence, he has been mixing it up with the top Brits for the last two years and at static events he is truly excellent.  He resides near Birmingham, UK now.

“He came 7th at Europe's Strongest Man in Wembley Arena and is a very worthy replacement for the Russian."

In a quasi-official statement, IronMind® was also told, "WSM is very sad to see Alex Klushev drop out of this year’s contest with such a severe injury.  We wish him a a very speedy recovery.  In his place The World Strongest Man has invited Alex Curletto of Italy.  We are very pleased to welcome in such a worthy replacement and wish him the best of luck in South Africa."