Paul Ohl reported to IronMind that, “A full house of community leaders and business executives attended the benefit dinner in St-Jean-de-Matha, the home of the legend of strength Louis Cyr.” 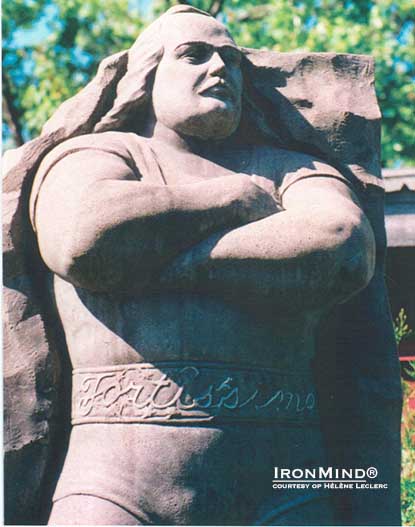 
“Antoine Bertrand, the actor who portrays Louis Cyr in the movie to be released on July 8, was the guest speaker, along with Rose-Maïté Erkoreka, who plays Melina Comtois, Cyr’s wife.  Bertrand made a strong statement in predicting a record box-office for the movie.  It got him a standing ovation.

“The big news though came from Jérôme Landry, chairman of Les Compagnons de Louis Cyr ( Order of Louis Cyr): The official announcement was that Louis Cyr’s patrimonial house will be entirely rebuilt in New England style and will become the Louis Cyr and World Strength Museum.  To this date, the fund-raising has exceeded $400,000 dollars and counting,” said Ohl, who commented on the four new chapters of his Louis Cyr biography.

For the second time in recent days, Ohl hinted that something big related to strongman might be on its way.
Is Fortissimus III coming?!
###