Zydrunas Savickas had a close miss with a world record attempt, there were a lot of missed attempts and the final results were not as high as expected, but at least one thing did go according to plan: Zydrunas Savickas won the 2011 Log Lift World Championship this past weekend. 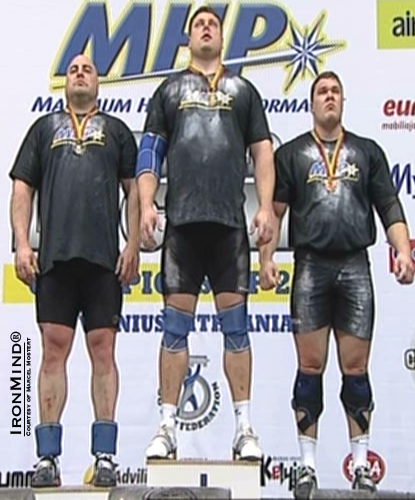 Flanked by his teammates Vidas Bleikaitis (left) and Vytautas Lalas (right), Zydrunas Savickas (center) was king of the hill at the 2011 Log Lift World Championships.  IronMind® | Courtesy of Marcel Mostert.

With a best lift of 192.5 kg in 3 attempts for Zydrunas, it was not his best performance,but enough to get the Log Lift World Championships title again in the Siemens Arena in Vilnius.

Not only Zydrunas, but all the athletes where very nervous and struggled with the big, thick, former IFSA log from stainless steel.  A few reasons where mentioned for this struggling by the athletes: It is early in the season, the IFSA log is a very difficult log because of its size and length, and the warm up was in another hall with another log. This makes it all not easier.
Also, the whole event was live on Eurosport, which gives extra pressure to the athletes because of the tight time schedule and strict rules by 3 referees.
The whole event took exactly one hour but was anyway a success and we have to give credit for all the athletes to do such an effort in these circumstances. After all, 180 kg with the steel log is still a very great result.

Vidas Blekaitas took 2nd place with 190 kg and Vytautas Lalas 3rd place with 185 kg.  He missed 195 kg two times after being very close there.  He gambled too high to beat Zydrunas.
Patrick Baboumian was the only one who broke his national record, in his case 185 kg for a new German record and 4th place overall.  Also Ervin Katona hit the 185 kg.  The reason that Vytautas got 3rd place with 185 is that he got his 185 kg already in the first attempt.

Now, from our side (as the organizers) we want to put a comment as we read on some forums, where people keep criticizing or simply don't understand how all works for a competition like this.
They ask why they some athletes are not there or who should be there. Then read this:

Of course we missed some good lifters as well.  For example Misha Koklyaev, but he couldn't make it because of his preparation for the Arnolds (as some other athletes were as well).  The Log Lift World Championships came too soon for him so he couldn't come Or Marshall White, invited through the American federation ASC, and at this moment one of the best lifters to get ready in February, with his personal best at 186 kg.

Terry Hollands was also at the list, but got a small shoulder injury last week and called of on Friday morning.  The only substitute to get this fast was Maris Leitis from Latvia, who drove quickly to the show on Saturday morning.

With these few examples we just want to give the people an impression that its really not easy to get all the best at the start , that all good lifters have been invited which justifies that this  championship is simply the strongest at his moment, which is normal in sport.

And for all those who throw just words and negative comments on the internet, assure yourself first that you stay to real facts, before you tell fairy tales. It would make our sport a lot better and credible.

The Log Lift World Championships will be replayed on Eurosport at Sunday 20 February.