Almaty—How confident was Liao Hui? After missing 160 kg on his second attempt in the snatch, he jumped to 166 kg to attack Georgi Markov’s longstanding world record. 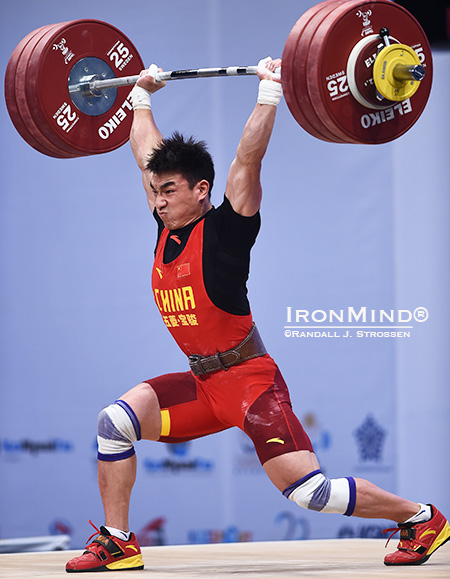 Liao Hui (China) came into this meet with the world record in the jerk and the total in the 69-kg class, and at the World Weightlifting Championships tonight, he added the snatch world record to his collection and pushed up his world record in the total, too, when he made this 193-kg clean and jerk on his second attempt. IronMind® | Randall J. Strossen photo


If Liao missed it, you can imagine the comments from the Monday morning quarterbacks, but the call proved to be wise as well as gutsy because he smoked it—winning the gold medal in the snatch and bringing an 11-kg lead into the clean and jerks.

Opening with 185 kg, after everyone else was done, Liao made short work of the lift and then jumped to 193 kg, for another success and the world record in the total.

Five attempts, three gold medals and two world records—Liao passed on his third clean and jerk but watch for even more from this guy down the road.