Wroclaw, Poland—Liao Hui (China) hasn’t competed internationally since his gold medal performance in the 2008 Olympics, but he came back with a bang in the 69-kg class at the World Weightlifting Championships: he won all three gold medals, and on the last attempt of the category, he broke the world in the clean and jerk as well as in the total. 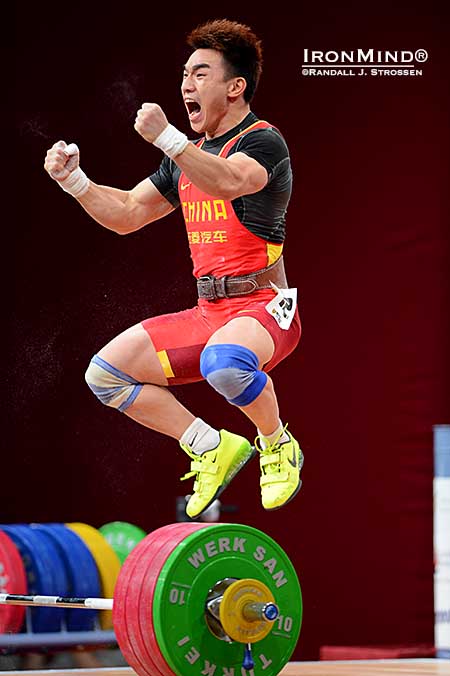 Two lifters were in a class by themselves in the snatch: Oleg Chen (Russia) and Liao Hui.  Chen opened with a very nice 151-kg success, and Liao Hui replied with an equally good 155-kg opener.  Chen was heavier, so he replied with 156 kg on his second attempt and made another terrific lift.  Showing that he was there for a big number, Liao Hui jumped 5 kg and sank the putt once again.  Chen took the same weight, 160 kg, on his third attempt and absolutely smoked the lift.  Gold medal in snatch already his, Liao Hui called for 166 kg in an effort to break Georgi Markov’s longstanding world record (1978), but he missed the lift and judging by his reaction, it was something that he felt was within his grasp.  Kim Myong Hyok (North Korea) got the bronze medal in the snatch with 152 kg.

Fast forwarding in the clean and jerk, Firidun Guliyev (Azerbaijan) opened with a routine 185 kg, and then jumped to 194 kg in a bid to break the Junior world record in the jerk, which was held by Liao Hui.  He missed the clean and then rode the barbell off the platform as if he were lying face down on a skateboard.  He repeated with the weight, made a good lift, but produced more drama as he collapsed on the platform, maybe blacking out from the effort.

That success had also put Guliyev in gold medal position in the jerk, but it wouldn’t last long because Liao Hui punched up what looked to be a routine lift for him with the same weight.  But wait, just because that success gave him two more gold medals for the evening, he wasn’t done: he called for 198 kg to attack Zhang Guozheng’s world record in the clean and jerk, and Galabin Boevski’s world record in the total—both set in 1974—on the final attempt of the evening.

Liao Hui gave a big pull, got under the bar, stood up and had to take a step forward before getting set for the jerk.  Driving the bar up and himself under it, he got the weight fixed overhead, worked to  keep it there as he recovered, and then got the down signal—not to mention those two world records.

Outstanding lifting—fitting for the spectacular job the Polish Weightlifting Federation, led by their president Szymon Kolecki, is doing presenting a World World Weightlifting Championships that is already winning widespread praise.