Doha, Qatar - Whenever Li Hongli (China) lifts, you expect big things from him in the snatch and tonight he added gold medals in the jerk and total to the one he pocketed in the snatch. 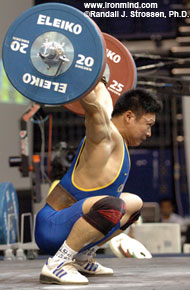 Li smoked 160 kg on his first attempt in the snatch, made another great lift with 165 on his second attempt, but sent 170 up and over on his third attempt. Sebastian Dogariu (Romania) got the silver medal in the snatch after running three good lifts: 155, 160 and 163. Qatar's Sufyan Abbas edged out his former teammate Georgi Markov (Bulgaria) for the bronze medal on body weight, with both lifters hitting 160.