Like many in the strongman world, we at IronMind® were devastated to hear the news of Lene Karlsen’s death and it has taken me this long to bring myself to say anything about Lene in public. 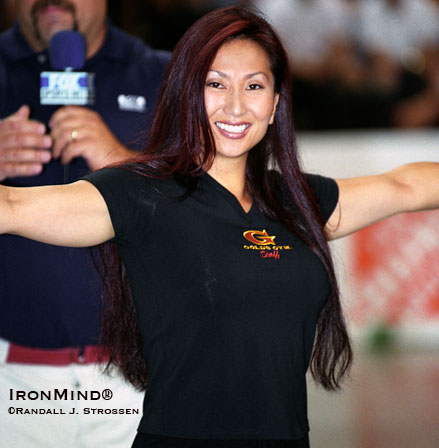 
I met Lene at Ilkka Kinnunen’s 2001 Helsinki Grand Prix and while there were plenty of reasons why Lene might catch your eye, one thing I noticed was that this woman with hair good enough for a shampoo commercial wasn’t just intently following the contest, she was simultaneously timing events, taking notes, and snapping an occasional picture.

“MILO material,” I thought, never guessing that in the coming years, Lene Alexandra Karlsen would enter the inner circle of MILO authors, becoming our nonpareil reporter on strongman contests.

Lene Karlsen made no bones about such girlie things as having so many pairs of shoes that she had to keep some of them at her father’s house, but she also was no stranger to rolling up her sleeves and jumping in to do her job as a reporter.  It was Lene Karlsen who managed to snag the elusive Big Z (Zydrunas Savickas) for an exclusive MILO story, and her colorful quips (often filled with innuendoes or puns that we reluctantly had to edit per the bowdlerized standards of MILO), brought a lot of smiles to IronMind® as we read her articles.

Multitasking, it turned out, was one of Lene’s special skills, as evidenced in her report on Raimonds Bergmanis’s All-Strength World Cup:

But for all her hard work, there was the glitter side, too, and while she might have been better suited for the life of a rock star or a movie actress, Lene Karlsen landed in the world of strongman and for that we’re all very fortunate.  We weren’t ready to give her up quite yet, but that didn’t turn out to be our choice.  Nonetheless, we are thankful for having Lene while we did - a little Lene could pack a lot of sunshine.

“You know what they say: money can’t buy you happiness, but I’d rather cry in a limo than in a mini-van . . . .”  Lene Alexandra Karlsen.

We will miss you a lot, Lene - may you rest in peace.