The competition was red hot at the Loch Norman Highland Games, with top throwers showing especially fine form for so early in the 2010 Highland Games season. 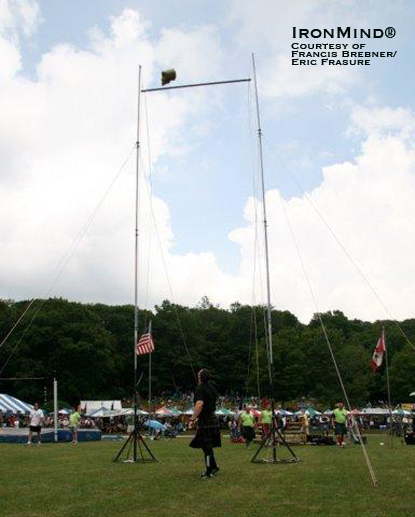 Big throwing characterized the 2010 Loch Norman Highland Games last weekend as Larry Brock and Eric Frasure dueled, producing a world record and some of the finest throwing at the beginning of a Games season.

As the contest continued with the 22-lb. hammer, spectators cheered on Frasure and Brock as they went back and forth in a ding-dong battle.  This time Frasure came out triumphant with the winning throw of 114’ 5”, and Brock now having to settle for second place with 112’ 4”.  Mike Pockoski landed in third place with 109’ 11-1/2”.

In the caber, three athletes landed 12 o’clock tosses:  Brock and Pockoski tied for first place, with Frasure in third place.

The 22-lb. sheaf toss was a magical event for Frasure as he conjured up not only the winning throw but also a new world record with a height of 36’ 1”.  Brock held on to second place with 31’, and Mike Nease, at 29’, settled for third on countback.

The final event of the competition, the 56-lb. weight over bar, ended in a tie between Brock and Frasure at 17’, with Chris Chafin and Mike Nease at 16’.