Victoria, British Columbia—Larry Brock (USA) finished the first day of the 2010 IHGF Highland Games World Championships tied for first, but when the final scores were in today, he stood alone at the top of the podium. 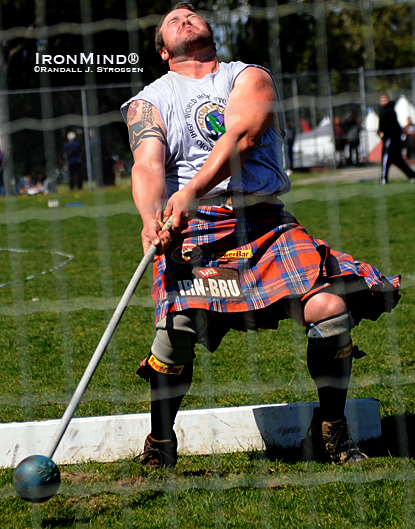 Larry Brock won both hammers, and both weights for distance, but even more, he won the overall title at the 2010 IHGF Heavy Events World Championships.  IronMind® | Randall J. Strossen photo.


Today’s competition opened with the open stone, which was reported to weigh a heavy 17.7 pounds.  Sebastian Wenta (Poland) won the event, followed by Scott Rider (England), and then Pat Hellier (New Zealand).  Larry Brock was a distant sixth, but if anyone ruled him out of the title run at that point, they’d be proven wrong because the “Brock star” was tied with Sean Betz for third place overall at that stage.

Next up was the 28-lb. weight for distance and Brock won the event, with Harrison Bailey III coming in second and Sean Betz picking up third.  Now Brock was tied with and Wenta for first place, both with 24 points.  Rider was sitting in third place, with 25 points, and Betz was in fourth, with 26 points.

The final event was the heavy hammer: Brock won; Craig Sinclair (Scotland) was second and Greg Hadley (Canada) was third.

Here are the final places and points.