Adding another feather to his cap, Larry Brock won the prestigious Grandfather Mountains Highland Games this past weekend. 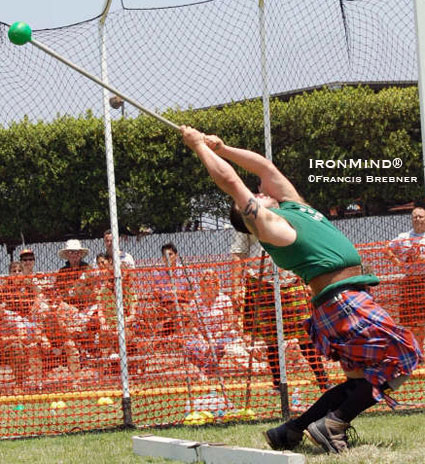 Getting long in the hammer, Larry Brock gets ready to launch another big throw.  IronMind® | File photo by Francis Brebner.

The 54th Grandfather Mountain Highland Games held this past weekend included a first-class lineup of America’s best heavy athletes, who battled it out over the two-day event.

The Games got off to a great start for Frasure, who won the 20-lb. open stone with a distance of 48’ 2”.  This throw is a huge improvement in Frasure’s putting over last season.  In close second was Brock at 48’ and in third was Sorin at 46’ 11”.

The 28-lb. weight for distance was another close skirmish between Brock and Overfelt, with Brock snatching his second win of the day with a distance of 82’ 4”.  In second was Overfelt at 81’ 5” and in third, Frasure at 79’ 5-1/2”.

The final event of the competition, the 56-lb. weight over the bar, witnessed four athletes establishing a new ground record as Brock, Pockoski, Frasure and Overfelt all tied at 17’ 6”.

Brock, who is looking on form for next weekend’s IHGF World Highland Games Team Championships, which will be held in Antigonish, Nova Scotia, said he was very happy with his performance and is looking forward to possibly bringing the team title home to the USA.