Once again, the Sacramento Highland Games drew some of the biggest names in the sport, with two-thirds of the podium from last year’s IHGF Highland Games World Championships coming to Northern California to test their throwing skills. 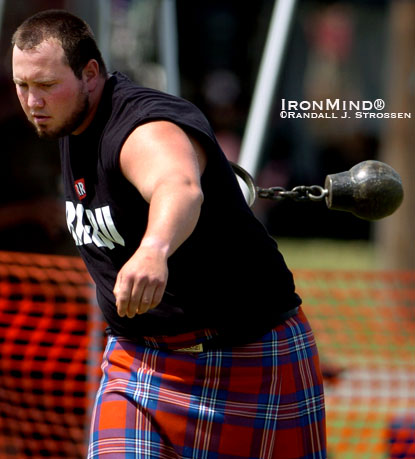 The 2010 Sacramento Valley Highland Games held this past weekend in Woodland, California, were a smashing success—due to not only the beautiful weather and the several thousand spectators who turned out to watch at the grand venue, but also the massive turnout of over 100 amateur athletes who stormed the Games field to compete.  Run by Steve Conway and his expert crew who make up the SHA, these Games went like a Swiss watch, with every event perfectly timed to a tee.

In the first event with the 22-lb. Braemar stone, it was a narrow first victory for Rusty Price with a put of 41’ 7”.  He was followed closely by Dan McKim with 40’ 7” and just breaking into third place was Sean Betz with 39’ 9”.

After four events, two athletes—Brock and Price—had two wins each, with the athletes then warming up for the 22-lb. hammer.  Brock marginally nailed his third win with 113’ 3” over Betz, who landed in second place with 112’ 9”.  Mike Pockoski, the current IHGF world hammer champion, had to settle for third place with a great throw of 110’ 7-1/2”.

The final event, the 56-lb. weight over the bar, was a tie between spinners Bailey and Betz at 18’, with Hobson and Brock tied at 17’.

Asking Brock about his win and the Games, he said, “I am very happy with my overall performance, and my preparation and focus are going as planned this year.  I am just looking forward to competing and having fun—and as for Steve Conway and his SHA team, they did an absolutely great job as usual."

The next Games for Brock will be the Gatlinburg Highland Games in Tennessee.

Here are the overall places and points: