Cleveland, Ohio - The USA Weightlifting National Championships were action packed today, and the final class came down to the last clean and jerk. 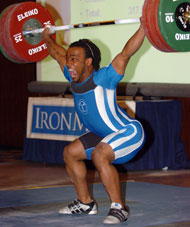 Lance Frye on his way up with his 150-kg snatch, which gave him a solid lead in the men's 77-kg category. IronMind® | Randall J. Strossen, Ph.D. photo.

The first day of the USA Weightlifting National Championships ended with a bang today as the men's 77-kg title came down to the final clean and jerk.

Lance Frye had gotten off to a strong start, hitting a 150-kg snatch that put him solidly in the lead, but when he missed his opening clean and jerk, things suddenly looked like they might change, especially when he missed the jerk again on his second attempt.

Matt Bruce added to the pressure by making a hard-fought success with the same weight on his third attempt, and it looked like he might emerge as the national champion, but with all the marbles on the line, Frye was not to be denied as he came through under pressure to make the 180 on his third attempt.

Other winners today were: