Let's just be frank here: IronMind® has a list of people in mind who are our favorites for top honors in the grip strength world in 2009. One of the people we are betting on for some sensational performances is Laine Snook, and today he made good, once again, by deadlifting a pair of Millennium Dumbbells. 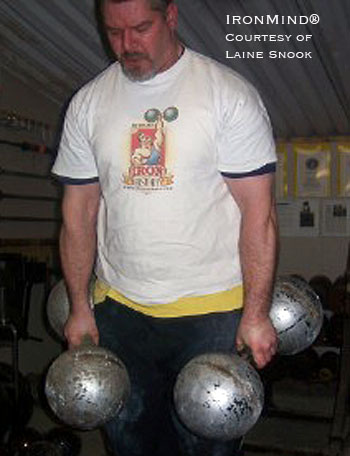 Most grip guys would be proud to deadlift a replica Inch dumbbell, but that's mere child's play for Laine Snook who, earlier today, deadlifted a pair of Millennium Dumbbells. IronMind® | Photo courtesy of Laine Snook.


Laine Snook first hit IronMind®'s radar screen when he certified on the No. 3 Captains of Crush® Gripper, which he officially closed under the watchful eye of no less a figure in the strength world than World's Strongest Man winner Jamie Reeves. For an encore, Laine went on to break the world record in the Rolling Thunder®, and along the way he has been elevating a variety of thick-handled dumbbells in ways that had previously defied all comers. For all this, though, the feeling around here is that Laine is on a roll, and he is just starting to produce some marks that will astound the grip world.

Laine broke the good news of his latest conquest, telling IronMind®, "I have just done a double Millennium deadlift in front of a small crowd. I had this lift on my list of 'things to do' in 2008 - and only just managed it. I collected Steve Gardener's Millennium at the weekend so that I could have a go before the end of the year. I had 2 failures (back) before finally getting it. I will do it again hopefully in the next few weeks - I needed to get this out of the way so I can concentrate my efforts on more demanding lifts."

As for detail on this pair of brutes, Laine provided the following details:

"I have had three previous attempts at getting this deadlift - on 8 November, at the BHSA annual get-together, at Steve's Gym on Gloucester in early December and again at Steve's Gym on the 20th - all close, but not completed. I collected Steve's Millennium last weekend and fully intended to get the lift done by the end of this year.

"I had three attempts today: the first was halfway up, and on the second, the right dumbbell hit my thigh and it blew out of my hand. I am pleased to say that the third went where it was meant to - all the way. I did manage to return the dumbbells to the floor under control.

"I will do the lift again in the next few weeks, and then I will dedicate myself to getting some big feats done with both the Inch dumbbell and the Millennium. By the way, I haven't forgotten about the Rolling Thunder®."

Congratulations, Laine - nice way to finish off the year and set the stage for 2009!