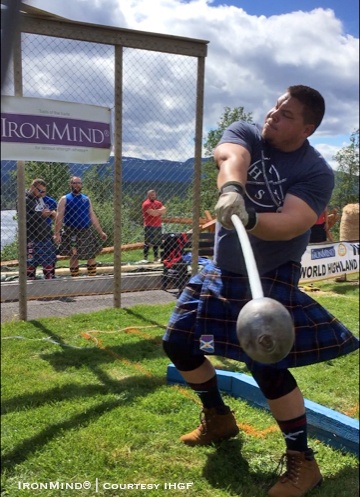 Reporting from the field for IronMind, Francis Brebner called the action on the record-breaking 2018 IHGF Amateur Highland Games World Championships.

High in the mountains, in the magnificent setting of the Fefor Hotel in Vinstra, Norway, three major IHGF world sporting events took place on the picturesque games field overlooking Loch Fefor with the backdrop of Mount Fefor. Altogether 36 athletes and officials gathered for the IHGF Power Week, which started with the 2018 IHGF Amateur World Highland Games Championships, a stellar two-day competition of 12 athletes from 11 countries. The athletes looked larger and stronger than last year and it showed in their overall performances, setting world and national records.

Several athletes achieved personal bests in the 56-lb. weight over bar, which started at 12’. Six athletes were still in the competition at 16’. Longhurst prevailed in the end, clearing 17’, with Nys second at 16’, and Lillie and Gunn tied for third at 15’.

The caber toss, with a caber 18’ long and 130 lb., also carried the title of IHGF Amateur Caber Tossing World Championships. Longhurst, a two-time winner and the defending champion, showcased extreme overall power as he slammed the caber to a perfect 12:00 for the win, retaining his title. Gunn took second on countback with 11:55, followed closely by Joe Pocock (Canada) at 12:05.

The 20-lb. Braemar stone was the highlight of the championships as Lillie, who had set a new amateur world record at the beginning of the season, opened at just over 47’. Upping this to 49’ in the second round, he unleashed 50’ on his final throw, setting a new IHGF amateur world record. Second place was a tight competition, with Friedemann marginally going ahead of Longhurst, 42’ 5-1/2” to 42’.