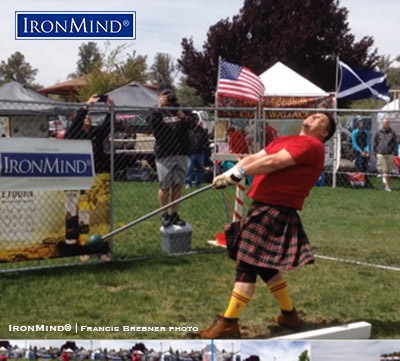 Kyle Lillie is a name to remember in the Highland Games heavy events. IronMind® | Photo courtesy of Francis Brebner

Kyle Lillie was pushed by Eddie Brown and pulled off a half-point win at the Prescott Highland Games, which was the third stage of the IHGF All-American Highland Games qualifying series—also establishing himself as a potential future star in the Highland Games heavy events.

The 2017 Prescott Highland Games was the third leg of six in the IHGF All American Highland Games qualifying series, and it featured a Highland Games star in the making, 25-year-old, 6’ 4”, 330-lb. Kyle Lillie, of Maine, in only his second season of competition.   More than 90 athletes turned out to compete over two days in the unique and picturesque setting of stone hills and lush green trees and surrounded by clan tents and vendors, creating the great atmosphere typically found in Scotland.

The A lineup included Eli Kiener, Eddie Brown, Sean Burns, Anthony Clinker, Alex Nobles, and Kyle Lillie. In the 22-lb. Braemar stone, Kiener vied with Lillie, who claimed the win on his final attempt with a class put of 46’ 3-1/4” and a new field record. Kiener placed second with 45’ 4-1/4”, and third was a tie between Burns and Brown at 42’ 1-1/2”.

The 56-lb. weight over the bar was an exciting show as five athletes battled at 16’; at 16’ 6”, Brown and Lillie contended, with Lillie taking the win. Kiener placed third but unfortunately tore part of his biceps, and he had to withdraw from the rest of the competition.

The 20-lb. sheaf toss was won with a great performance by Burns, the only athlete clearing the bar at 30’. Brown took second with 27’, with a tie for third between Clinker and Lillie at 24’.

Athletic director Mark Markley was pleased with the large turnout of athletes and the perfect weather over the two days of competition. The next leg in the IHGF All American Highland Games series will take place in Pikes Peak, Colorado, June 16–18, 2017.

Five athletes have qualified to date in the IHGF All American series: