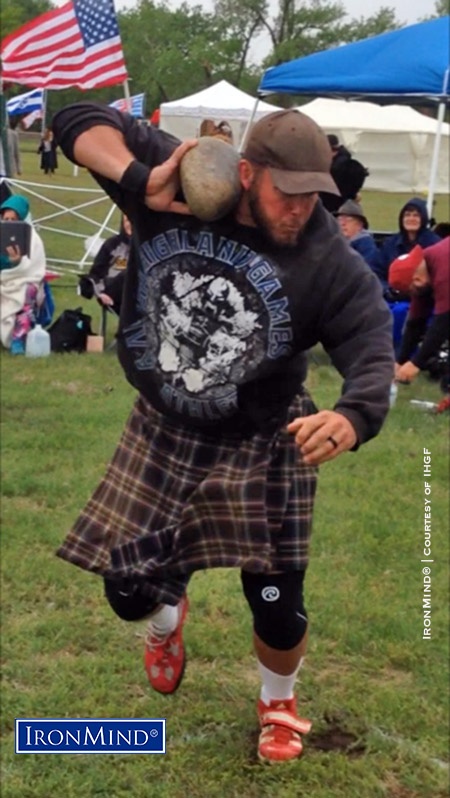 Skylar Arneson (shown) and Kyle Lillie turned up the heat at the 2017 Pikes Peak Highland Games, where Kyle Lillie won the Amateur A class. IronMind® | Courtesy of IHGF

The strong Amateur A field at the Pikes Peak Highland Games included stone putting duels between Kyle Lillie and Skylar Arneson in the run-up to the 2017 IHGF World Amateur Highland Games Championships.

The Pikes Peak Celtic Festival in Colorado was the fifth leg of the IHGF All American Highland Games series, and in faultless weather, a strong contingent of seven Amateur A heavy athletes went head to head: Chad Thompson, Andrew Heaton, Kyle Lillie, John Anthony, Bryan Staggs, Eddie Johnson, and Skylar Arneson. Three field records were established in the light and heavy hammers and the keg toss over the bar, which record is awaiting confirmation as a new amateur world record for the big Coloradan Heaton.

In the 22-lb. Braemar stone, both Lillie and Arneson, known for their stone putting abilities, went all out from the first round, with Lillie blasting out a best of 40’ 1” for the win over Arneson, who placed second with 38’ 11”; in third place was Anthony with a gallant putt of 37’ 6”.

The 56-lb. weight over bar was a slug fest between Heaton, Arneson and Lillie, who all tied at 16’. Heaton was the winner on countback, with Arneson second and Lillie third.
The caber, 19’ 11” in length and 108-lb., was won by Anthony’s toss of 12:15, over Heaton and then Arneson.

The 20-lb. sheaf toss was a four-way tie between Thompson, Anthony, Staggs, and Johnson at 28’, and on countback they placed in that order.

The final event, the 33-lb. challenge keg over the bar, was a highlight for Heaton, who showed no signs of fatigue as he set a field record at 25’ 1”, now awaiting verification as a new amateur world record.