Chiang Mai, Thailand - He did it in workmanlike style, going five for six, and when the class ended Roman Konstantinov (Russia) had pocketed the gold medal in the snatch and the total, along with the silver medal in the clean and jerk in the 94-kg category at the World Weightlifting Championships tonight. 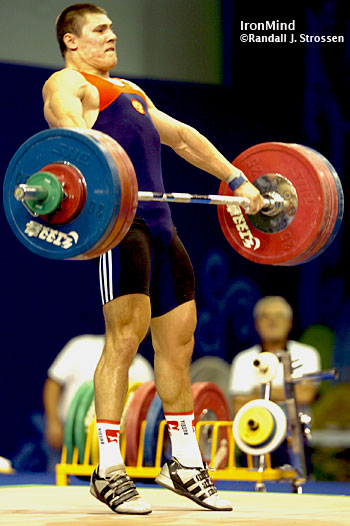 One kilo ended up separating each of the top three places in the snatch, but each of the three medalists took quite a different route.

Evgheni Bratan (Moldavia) had the highest opener in the class, 175 kg, but after making a good lift with the weight, he missed 177 twice - sending it up and over his head on his second attempt, and just not getting under it on his third attempt. Eduard Tyukin (Kazakhstan) made 170, missed 175 and then hit 176. Konstantin stuck 172 and 177, but he could not fix 180.

One of the pre-contest favorites, Szymon Kolecki (Poland) had not fared well in the snatch - after making a very solid opener with 173, he sent 176 sailing over his head twice, leaving him in seventh place after the snatch, but he is the world record-holder in the clean and jerk, at 232 kg, and he was in the for highest opener, 220, so there was a feeling that he could still close the gap. Yohandrys Hernandez (Cuba) also packs a big clean and jerk, so he was expected to be a factor as well.

Konstantinov opened with a conservative 211, to put himself in the lead, and Hernandez answered with a good 212 on his first attempt. Along the way, Arsen Kasabiev, looking to make up ground, took 217 on his second attempt, but when he missed racking the weight, the bar audibly clipped his leg as it crashed down, and that ended the young Georgian's night. Andrey Demanov (Russia) made the same weight on his second attempt , for the lead in the clean and jerk, and second position in the jerk. Kolecki lowered his opener to 219 and after bouncing twice, he stood up with the weight and rammed it overhead for a good lift and that made him the new leader in the clean and jerk, and put him in silver medal position in the total.

Eying Kolecki's position, Hernandez wanted them for himself, so he took 220 on his second attempt, but only did a pull. Constantin followed and made a very solid success, asserting his leadership in the class. Hernandez followed with the same weight, this time making a good lift, and bumping Constantin down in the jerk, on bodyweight.

Demanov wanted the gold medal in the jerk, along with the silver in the total, so he called for 224, but after an easy clean, he missed the jerk.

Now there were only two attempts left and both belonged to Kolecki, who called for 225, which would give him the gold medal in the jerk and the silver in the total, but after bouncing three times before he could stand up, he had to run forward to save the clean. Whether he was tired, or out of position, he missed the jerk, repeated with the weight, but this time he started up after only bouncing twice and had to dump the bar as he struggled to stand up, leaving him with the bronze medal in the jerk and in the total, and visibly disappointed in how his evening had ended.