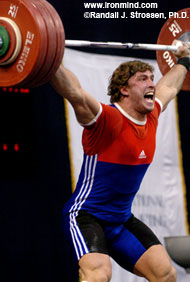 On the way up with the gold medal snatch, 192 kg, Dmitry Klokov lets off a little steam. IronMind® | Randall J. Strossen, Ph.D. photo.

Klokov opened with 186 kg in the snatch and, with an adjustment, made a good lift, followed by another good lift with 190 - he unleashed a roar before the lift, not a contrived made-for-TV act, but something primal. Another roar, another good lift, and the Russian lifter had 192 on the board and the gold medal in his pocket.

Moldavia's Alexandru Bratan was in for the silver: After hitting a good 185 on his first attempt, he had tried to move into the lead with 190 on his second attempt, but it was up and down, and no lift; he succeeded with the same weight on his third attempt to take the lead on body weight before Klokov roared and lifted his way past him.

Klokov made 222 on his first attempt in the clean and jerk, Bratan overtook him in the jerk with his second attempt, 223 kg, and Martin Tesovic (Slovakia), who had won the bronze medal in the snatch with 187-kg lift, made a nice 225-kg clean and jerk on his third attempt. Klokov worked hard and was very happy to make 227 on his second attempt, and now he could wait to see what happened.