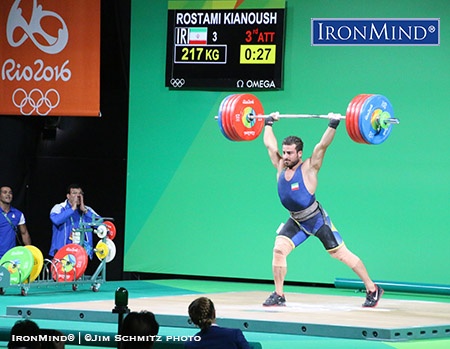 He missed his opener, 215 kg, but when it really counted, Kianoush Rostami (Iran) made this third attempt 217-kg clean and jerk, to win the gold medal in the men’s 85-kg class of weightlifting at the Rio Olympics. IronMind® | ©Jim Schmitz photo

Double wow: another unbelievable fantastic finish in the 85k class.

First, China’s Tian Tao missed 173, then jumped to 178 and missed, but makes a very, very hard and shaky 178 on his third attempt.

Then in the clean and jerk, he missed his 210 squat jerk twice, not even close, but jumped to 217 and power jerks it to move into first place.

Iran’s Kianoush Rostami, who had snatched 174 and 179 before missing 182, missed his opening jerk with 215, came back and made it and then waited for Tain to finish, and with the last C&J of the competition and needing 217 for the gold medal, Rostami cleaned and jerked it hard, but with no doubt, so he beat Tian by 1 kilo, 396 to 395.

The battle for 3rd place was just as exciting: Romania’s Gabriel Sincraian needed the 217 to beat Kazakhstan’s Denis Ulanov on bodyweight, both totaling 390.  This competition really raised the roof at the Riocentro Competition Pavilion.  It was just hair raising.