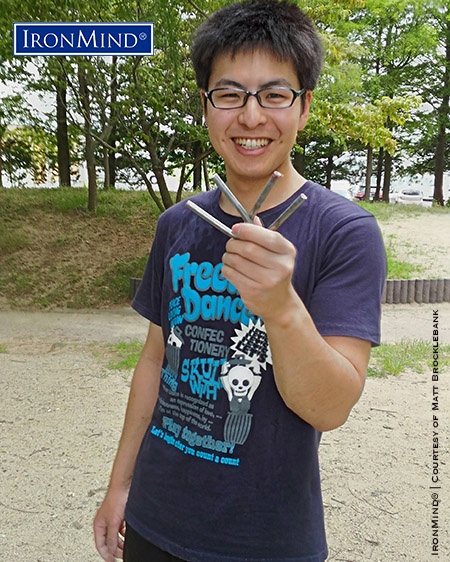 Time was when bending steel was the province of the village blacksmith or a carnival strongman, but 24-year old Kengo Nakasuji proves that being massive is not essential for massive performances: at 174 cm (5’ 8-1/2”) tall and weighing 67 kg (148 lb.) he has officially conquered the fearsome IronMind Red Nail.

“I have been training bending for about 7 months. I was fascinated by the Holle brothers (super strong benders!) and started from there,” Kengo Nakasuji told IronMind.

“I have been bending nails twice a week and doing sledgehammer training once a week. I normally bend 60Ds [60-penny nails], with an occasional IronMind Red Nail. When I’m bending I do several warm-up sets before my max effort attempt. When I’m using the sledgehammer I train my wrists with front levers to my face.

“My ultimate goal is to certify bending an IronMind Gold Nail.   “I am a big fan of IronMind products. I have a lot of IronMind grip strength tools and I always train with them,” Kengo said.

Matt Brocklebank served as the referee on Kengo Nakasuji’s attempt to bend the IronMind Red Nail under official conditions: “I'm happy to tell you that Kengo Nakasuji succeeded in bending the Red Nail today according to the IronMind rules. He bent two nails in a double overhand manner, both in under 15 seconds (he made it look all too easy!),” Matt reported to IronMind.

Congratulations, Kengo, and many thanks, Matt—it’s official: Kengo Nakasuji has just been certified and his name added to the Red Nail Roster!