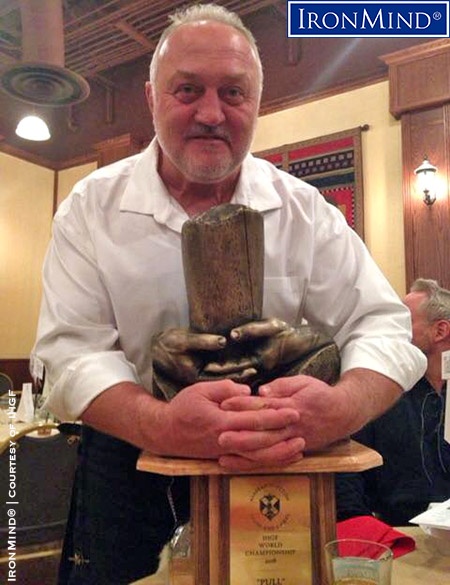 Bill Kazmaier as a plaster caster? Not really, but his hands were used to cast the 2016 IHGF World Highland Games Championships trophy shown here. Along with Francis Brebner, the Kaz will be commentating—you’ve seen and heard him at World’s Strongest Man, among other top contests worldwide. IronMind® | Courtesy of IHGF

Legendary strongman, powerlifter and no stranger to the Scottish heavy events, Bill Kazmaier will be calling the action with Francis Brebner at the 2016 IHGF World Highland Games Championships in Anchorage, Alaska.

The countdown continues to June 25–26, when the 2016 IHGF Highland Games World Championships will be held in the Far Northern landscape of Anchorage, Alaska. Plans for the championships have been in development over the past three years, following discussions between the IHGF and athletic director and board president Tim Kinkaid of the Alaskan Scottish Club.

Kincaid has left no stone unturned in planning this huge event, and he even traveled to Bressuire, France in 2015 to get a first-hand view of last year’s IHGF World Highland Games Championships. His club’s readiness is sure to make this year’s event—to be held at the Alaska State Fairgrounds in Palmer, Alaska—a memorable experience for all the pro athletes competing there, as well as for the spectators.

The winner of the 2016 IHGF World Championships will receive a very unique trophy depicting a pair of hands holding the bottom end of a caber, and the specially cast hands are none other than those of the legendary strongman and powerlifter, Bill Kazmaier, who is a resident of Anchorage.

Kazmaier will join Francis Brebner and the IHGF team in commentating for championships, which will also be filmed also for European TV.