A few days before the WSMSS Mohegan Sun Grand Prix, Bill Kazmaier made no bones about how he felt about Derek Poundstone, telling IronMind® exactly how he saw things. 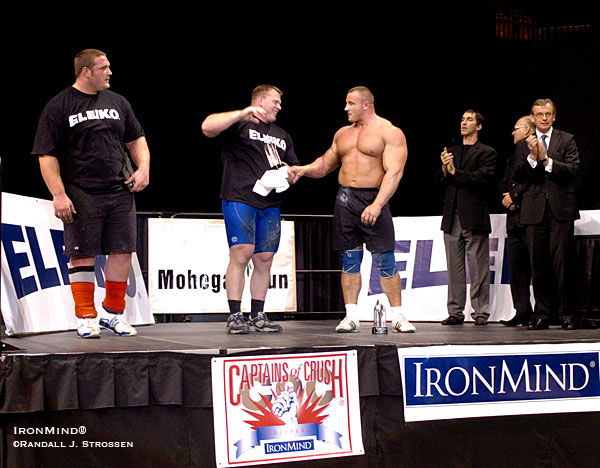 Coming into the WSMSS Mohegan Sun Grand Prix, Derek Poundstone made a bold prediction - that he was the man to beat Mariusz Pudzianowski - and he did just that. Tune into Strongman TV this Friday as Colin Bryce interviews Derek. IronMind® | Randall J. Strossen photo.


"The excitement of Poundstone in the mix will add to the appeal of this event as he is making a point for all strong-minded, strong-willed, superhero-types to stand up and Be A Leader not a Pushover,'" said Bill Kazmaier.

If The Mighty Kaz had any reservations, they hinged on what he saw as ever-bigger things for Derek Poundstone: "My [only] concern about Derek is that he should be on a course to challenge the very best in March [at the Arnold] and not lose a stride in his rapid vision/quest towards the top of the sport."

Bill Kazmaier was right on the money and with his victory at the WSMSS Mohegan Sun Grand Prix, Derek Poundstone confirmed his value as hot property in the strongman world. Accordingly, Strongman TV's Colin Bryce will be talking to Derek Poundstone this Friday, February 1, covering such topics as how he prepared for this contest and what he thinks of winning it - making good on his prediction that he was the guy to beat Mariusz Pudzianowski and proving that when the Kaz speaks, it's smart to listen.