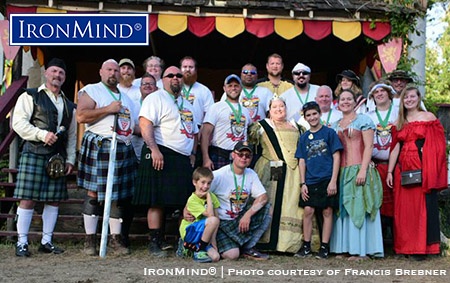 Pageantry and performance combined—the Kansas City Renaissance Festival served up a range of events, from jousting to tossing the caber. IronMind® | Photo courtesy of Francis Brebner

It was a great weekend at the Kansas City Renaissance Festival, where the crowds packed the bleachers surrounding the arena for an amazing show of jousting and the Highland games.   It was a complementary venue for both events, with the Highland games doing an appearance for a few events and then jousting for an hour and on throughout the day. Several classes, including novice, masters, women, and amateur, took part in both Highland games events and a few strength events, such as the stone carry, Wallace sword hold for time, and the spear throw, which was popular with the audience.

Saturday’s open competition was won by Scott Stansell with a good all-round performance, but in Sunday’s competition, Scott Campbell dominated nearly all the events and excited the crowd with three perfect 12 o’clock tosses in the caber and a 30’ throw in the 16-lb. sheaf.

Athletic director Ian Elder was delighted with how well the games were received at the festival and looks forward to making next year’s show even bigger and better.